If you study ice core data, which shows how the earth’s temperature has changed over the past million years, and the relationship between CO2 emissions and temperature, we discover that the earth goes through natural cycles of warming and cooling. Every 100,000 years or so there is an ice age, where the global temperature gets colder, glaciers form, and sea levels lower by several hundred feet.

Between ice ages there is a natural cycle of global warming and cooling, and the levels of carbon dioxide also change.

This natural cycle of global warming and cooling can be seen from the deepest ice cores in Antarctica (EPICA and Lake Vostok).

The deepest ice, and therefore the ice with the longest record, is found in Antarctica. As the ice in Antarctica is mostly over land, as opposed to the Arctic where most of the ice is floating on sea, this makes it ideal for deep core sampling. EPICA is the deepest of the ice cores and it also goes farthest back in time. Figure 2 shows the temperature and radiation data as calculated from the Milankovitch cycles. As can be seen, there is good agreement between the timing of orbital cycles and the temperature changes. It is also noticeable that there is a tendency for times of higher radiation to be associated with higher temperature but the correspondence is far from perfect. Figure 3 shows temperature and CO2. As can be seen, there is close correspondence in the timing and relative magnitude of the two variables. Although not clear from this chart there is general agreement that temperature changes precede CO2 changes during the rising phase and CO2 lags temperature by a larger amount during the falling phase.”

The following ice core data graphs are taken from the climatedata.info website: 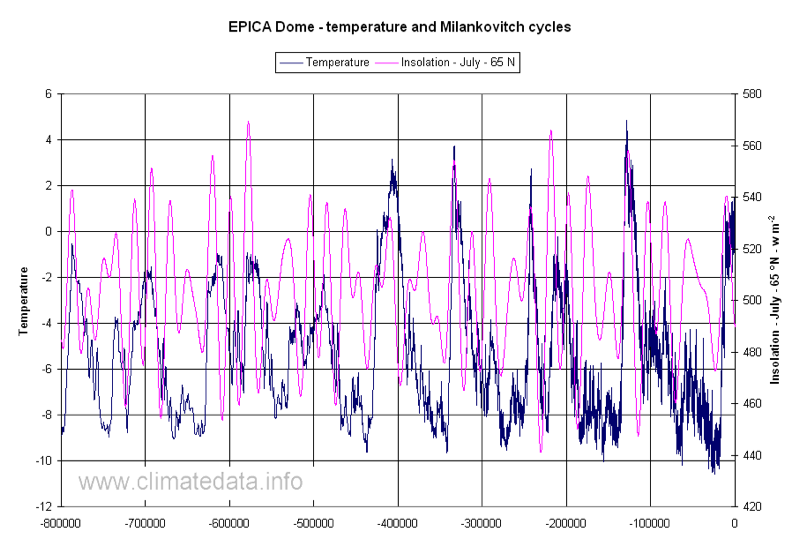 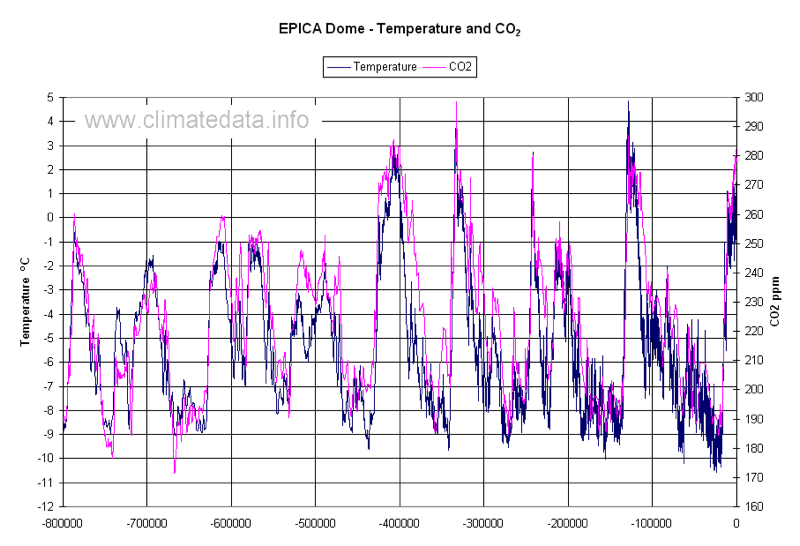 OK, so the earth goes through cycles of temperature change. How does the earth’s natural cycle of climate change relate to the current global warming cycle?

The subject has been so politicized that a rational discussion is almost impossible these days, and I won’t get into it. I will just put this forward for your consideration: What if the current global cycle of warming has little to do with man-made fossil-fuel CO2 emissions, and has more to do with the earth’s natural warming and cooling cycles? What if the Industrial Revolution just happened to coincide with one of the planet’s warming periods?

People who say things like this are regarded as kooks and conspiracy theorists. However, some global warming supporters postulate something I think is even more crazy: man-made runaway global warming, where all life on earth is threatened.

This assumption is plausible I suppose, but only if you think the world is going to end very soon. I don’t think that Gaia, which has been evolving for 4 billion years, would suddenly turn on the life it has so painstakingly nurtured.

Do man-made CO2 emissions really have such a dire effect on weather and temperature?  I prefer to take a more optimistic view. I prefer to think that the earth has been around for billions of years, and that Gaia EXISTS to cocoon and nurture the life it has evolved to support. Call me a nut, but I think that Gaia wants to cooperate with humanity and not destroy it.

Let’s take a look at electric cars. Electric cars are supposed to be more environmentally friendly, avoiding the stink and pollution of fossil fuel vehicles. But there’s another side to this story.

The disposal of used electric batteries poses a terrible pollution problem, similar to that of nuclear waste.

More than 1 million electric vehicles were sold worldwide in 2017. The study authors estimate that those cars alone will ultimately result in 250,000 tons of discarded battery packs. If those were to end up in landfills, they’d run the risk of going through a process called “thermal runaway,” which is basically a chemical reaction in the battery that can cause it to heat up, potentially to the point of burning or exploding. (It’s the reason why TSA prohibits spare lithium-ion batteries in checked baggage when you board a plane.)”

How much waste would be generated if millions more electric cars were sold each year?

Moreover, batteries used in electric cars contain cobalt. Two-thirds of the world’s cobalt production comes from the Democratic Republic of the Congo, a communist dictatorship that sends tens of thousands of African kids into mines, scrabbling and retrieving cobalt. These kids get sick and even die.

From CNBC: “The African nation supplies more than two thirds of the world’s cobalt but human rights groups have raised concerns that the industry relies on child workers.”

Oops. As I remarked in my last post, we don’t worry too much about the inconvenience of human rights in our Brave New World run by AI, Big Tech, and multilateral corporations interested only in the bottom line.

While virtue-signaling drivers in the West proudly show off their electric cars – trying to solve a global warming problem that might not even exist – African kids are being exploited and dying. Battery waste is piling up.

Pesky problems like human rights get brushed under the rug in the name of economic “progress.” This is the new scientific, materialist technocratic state that is being pushed by Big Tech.

What does this new world look like? Dr. Antony P. Mueller, in a brilliant article in Mises.org, describes this future in “From Lockdowns to The Great Reset” at https://mises.org/wire/lockdowns-great-reset

This coming technocracy involves close cooperation between the heads of the digital industry and of governments. With programs such as guaranteed minimum income and healthcare for all, the new kind of governance combines strict societal control with the promise of comprehensive social justice.

“The truth, however, is that this new world order of digital tyranny comes with a comprehensive social credit system. The People’s Republic of China is the pioneer of this method of surveillance and control of individuals, corporations, and sociopolitical entities.

“For the individual, one’s identity is reduced to an app or chip that registers almost any personal activity. In order to gain a few individual rights, and be it only to travel to a certain place, a person must balance such apparent privileges with his submission to a web of regulations that define in detail what is “good behavior” and deemed as beneficial to humankind and the environment. For example, during a pandemic, this sort of control would extend from the obligation of wearing a mask and practicing social distancing to having specific vaccinations in order to apply for a job or to travel.

“Under the order envisioned by the Great Reset, the advancement of technology is not meant to serve the improvement of the conditions of the people but to submit the individual to the tyranny of a technocratic state. ‘The experts know better’ is the justification.’”

Antony P. Mueller, “From Lockdowns to The Great Reset” at https://mises.org/wire/lockdowns-great-reset

What this guy says is true. It’s happening right before our eyes.

The human race better wake up, and do it soon. Human rights, liberty, and freedom are not luxuries, but the precious commodities of life. The global elites want a dead, sterile, scientific-technological society based on materialism and the squashing of all religion and spirituality, controlled by them. We can’t let this happen. I don’t want to live in a hive-mind society where everyone thinks alike. I am not a Borg, and neither are you. I don’t want to live in a dead future, in a repressive society where people are afraid to speak out and where all spirituality is crushed.

Let’s wake up and speak out now, before it happens!

In the words of the great John F. Kennedy,

The same revolutionary beliefs for which our forebears fought are still at issue around the globe—the belief that the rights of man come not from the generosity of the state but from the hand of God.”