The dark-light conflict on this planet is being directly reflected in current events. As the light penetrates the darkness, evil is being exposed. This is a positive development. When I grew up in the 1950s the fix was in. Nobody ever talked about pedophiles or corruption in high places, except for fringe elements that were silenced by being called "conspiracy theorists." It's actually a LOT better now, even though chaos reigns. This is what happens during a shift from darkness to light. Human systems, like physical systems, are dynamic and non-linear. They follow the laws of chaos theory. First, the elements of the system begin to behave in unexpected ways (wild cards). Elements of the system go off in different directions, causing seeming chaos and allowing for many more choices or paths for the system to evolve. We are in this period now. It's important to keep in mind that the origin of the dark-light battle is the light. The darkness is being exposed because human consciousness is expanding. That's a good thing.

The final battles in these End Times will be two-fold: the exposure of the corruption and the satanism and the pedophile networks that underlie the evil in the government sectors, and the exposure of the hidden special access programs that have sequestered highly beneficial technology. The secrecy surrounding both of these is extreme, because the crimes that are being committed are egregious. The dark is fighting for its very existence. Look for more chaos and more disclosure. Don't be afraid, it's a good thing.

The Duality and the Light-Dark Battle

The duality operates in both the dark and the light sectors. For example, consider the concept of globalism. On the light side, globalism means open borders and greater cooperation between nations. On the dark side, globalism and open borders means that trafficking in human beings becomes easier. During the next two years (2018 and 2019) exposure of this is going to make the mainstream news media and not just "fringe" sites like 8chan. Some of the names involved will be shocking. Some of the events that will be exposed will be almost unbelievable. Many of the most evil people will be shut down, but will be allowed to walk away. That's because to detail their crimes will upset too many people and be too divisive. I have said consistently that 2018 and 2019 will be the key years to begin this process. It has already begun.

The Truth Is Too Unbelievable

What if I were to tell you that JFK was not assassinated by Lee Harvey Oswald? The might be believable, but what if I told you that the shooting of Oswald by Jack Ruby in Dallas back in 1963 was totally fake? That it was a movie with crisis actors, filmed on the set of the famous soap opera As The World Turns? Would you believe that? No rational person would because it sounds crazy to even say it. What if it were true? What if the rabbit hole goes deeper than we ever thought?

I remember seeing that incident on the news when I was 12 years old. I always wondered why the cameras were set just right to show the shooter plugging Oswald in the stomach.

Things are not always as they seem.

For example, digital imaging technology is so sophisticated that literally ANYTHING can be faked. So what should we believe?

In these times of disinformation we have to find the God within. We have to use our discernment. We have to go to the light and view everything from that perspective.

Does it matter, really, if the video of Jack Ruby shooting Oswald is a fake? Not really. We know that forces of darkness are active on the planet. Anyone who is even remotely awake can see this now. The only solution to a world of fake news is to trust the divine inner self, and find peace there. As old souls we can do this, for we have woken up so many times before in previous lifetimes.

The transformation of the consciousness of the human race will also be accelerated by the weather. The planet is undergoing a periodic water cycle, which occurs every half-cycle, or every 13,000 years. 13,000 years ago the Sahara was lushly green. At that time the planet was cooler and wetter. We are heading into something similar at the end of the current 26,000 year cycle.

The planet is going to get cooler. In the northern hemisphere winters are going to get longer and colder. Ice core data from the Arctic and the Antarctic show that global cooling and warming are natural cycles, occurring like clockwork over the past 1,000,000 years. Ice ages occur approximately every 100,000 to 120,000 years. Periods of global warming and cooling occur naturally within the inter-glacial periods. Occasionally there are mini-ice ages. The last one occurred between 1645 and about 1715. It was called the Maunder Minimum. We are due for a smaller one now, one that will last approximately 25 to 30 years. The purpose is to cleanse the oceans and allow for more fish and aquatic life that will feed an increasing human population. If you've ever owned a fish tank you know that the water can be treated, but eventually you have to empty out the tank and start again. 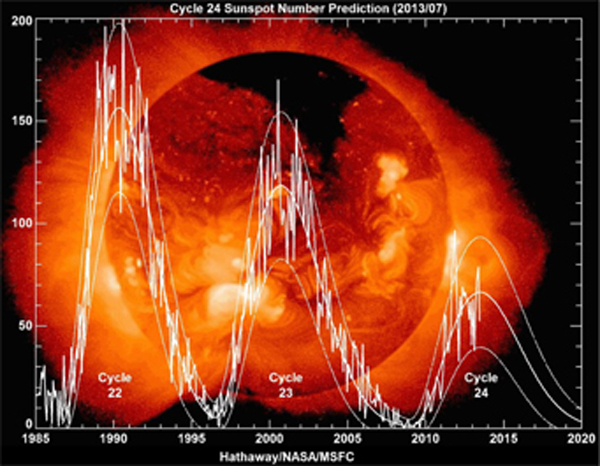 Notice the height of the solar maximums since 1990, in cycle 22, which peaked at about 200. Every 11-year cycle since then, the peaks have gone lower. The latest solar cycle maximum, cycle 24 in 2014, peaked at about 100. So the peaks have been falling in the last two cycles. Some scientists project that the next two cycles will go even lower: thus the mini-ice age. During the last one (1645–1715), snow fields remained year-round even at lower altitudes.

This weather change is going to upset a lot of strongly-held and cherished beliefs in human consciousness. It's going to break paradigms. Climate scientists are already saying that global warming will be "not as bad as we thought." (https://www.express.co.uk/news/uk/950748/climate-change-scientists-impact-not-as-bad-on-planet). It's going to spur a lot of change in human activity, and help to defeat the current world order.

Everything is conspiring for change! The next 30 years is going to be a wild ride. But at the end will be a much better opportunity for peace on earth and humanity much more united and on the same page.

It will become obvious during the next decade that the planet is cooling. During the middle period of the global cooling,  in northern climates, the primitive electrical grid – wires on poles – will be strained to the limit and will fail more and more often.  This will lead to the absolute necessity of new global heating technology, which will come from alternative sources such as geothermal, solar, and the development of new battery technology. It will lead to the release of hidden, advanced technologies that are not fossil-fuel dependent. Our reliance on oil will have to decrease. Necessity will be the mother of invention! Humanity never does anything unless events force us to. The weather, along with the exposure of the evil on this planet, will alter human consciousness forever.

Among the forerunners of change is the U.S. military. For most of my life I saw the military as aiding the dark army. We have troops in over 150 countries. Our armed forces have been the hammer behind forced regime change and have assisted multinational corporations in exploiting other countries' resources.

Well, there are white hats and dark hats in the military. Many of the military white hats saw the direction the planet was going in, and their role in aiding a dark New World Order. When Donald Trump was elected (there is a story behind that!) the white hats in the military rallied around Trump. This can be seen by the number of military and ex-military in his administration. In many ways the current administration is an extension of the military. Trump’s Cabinet at one point contained three generals  – Gen. Kelly, Secretary of Defense James Mattis, and Lieutenant Gen. Michael Flynn, who initially served as national security adviser.

Why the military, and especially the Marine Corps? Because this battle between dark and light is not only ongoing in the spiritual realms, but is also a battle on the ground. We can see how the battleground has shifted as the light moves over the planet. First, the imprisonment of dozens of corrupt princes in Saudi Arabia last fall. (The relationships between the Saudis and some U.S. politicians will be exposed.) Next the talks between the Koreas, President Xi of China, and Trump. This will lead (I think) to a reunification of the Korean peninsula and the elimination of the nuclear threat from NoKo. Next was the incredible (and recent) events in Armenia, which have barely been mentioned in the press. The corrupt PM, Serzh Sargsyan, voluntarily resigned after citizens (and the Armenian military!) took to the streets in day after day of protests. Next in line is Iran. French President Macron and German leader Angela Merkel are in DC representing the EU, trying to save the Iran deal that was negotiated back in 2015. Last fall Iranians took to the streets protesting corruption in the current regime.

After that comes Pakistan, who has major connections to Saudi Arabia.

Then the biggie – the Middle East, which has been a threat to world peace for the past 2,000 years. The problem of Israel and its Arab neighbors will have to be resolved before world peace can occur.

What a time to be alive!

We are living at the end of the last 26,000-year planetary cycle and the beginning of the next one. For thousands of years humanity has been mired in an old energy. There has been little spiritual progress. War and conflict has dominated history. That is changing.

Human beings want major change. But humans don't like change when it happens! We go into fear when events don't go like they went before. Well folks, get used to massive change because it's just beginning. From the weather to human events, the pace of change will accelerate. It will become obvious after a while that we are headed to a brighter future. The dark army will try to bring things back to the old energy. They will not succeed because the light is too powerful.

The mantra for the coming changes is, "Things are not always what they appear to be." Look between the lines in the reporting of current events. In order for good results to occur, the darkness must be exposed. During this period it will appear that the dark is winning. It isn't.