If you take the Yin Yang symbol 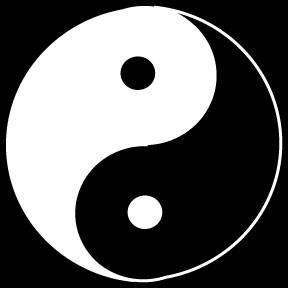 and lay it on its side, you can trace the infinity symbol like so: 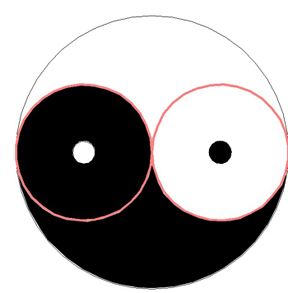 The infinity symbol can also be written as two tangent circles, as you can see from the diagram above.

Let us call the left of the infinity symbol the spiritual component, and the right, the physical component.

In mathematics, the infinity symbol also shows up in what is called the Lorenz Attractor: 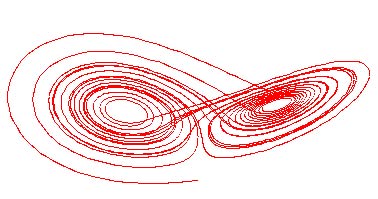 However it is written, the infinity symbol represents a very important concept. The symbol indicates two energy loci that meet in the middle.

The Still Point merges the combined energies around both loci effortlessly in a singularity, or point of tremendous mass/energy density. The Still Point is a place of perfect harmony, or peace, because energy must pass through it (or around it) without disturbance of any kind. How is this possible? Only through a perfect harmonious matching of wavefronts. Mathematically, a numerical ratio exists which expresses this concept precisely. It is called the Golden Ratio or Phi ratio. If you have ever meditated successfully, you may have reached a place of perfect calm and peace. You have reached your personal Still Point.

By flipping the symbol on end, we place the spiritual above, and the physical below:

A human being is a spirit temporarily associated with a physical body, and perceiving through the limiting senses of the body. Of course, physical matter is not capable of perfect melding and harmony and that is why there is always disharmony within it. The denser the energy, the more difficult it is to achieve harmony. Thats why life is sometimes so hard! However, although it is impossible for physical matter and energy to achieve perfect harmony, that is not so for a spirit. Spirit may attain the Still Point because it is non-physical.

The Still Point represents the power of the static the nonphysical spirit to exist serenely within the grosser energies of the physical. When you find your personal still point, you are perfectly balanced between the spiritual and the physical. You can feel your connection to the creative energy of the universe! I remember a concert given by the great pianist Bill Evans. The pianist was playing the most profound music, yet his body was completely motionless. As a listener, I couldnt keep still I was so excited, but Evans had found his still point and was so intimately connected to creative power that all of his energies went into his hands in their caressing of the keyboard.

It appears that it is almost impossible for any of us to be at the Still Point, for it is a place of perfect balance. The mistake we make is to model our own consciousness on the behavior of physical matter and energy. We have forgotten that we created the universe to be our playground, not our master! This point of view makes absolutely no sense to those who do not understand their spiritual nature, but it is almost common sense for those of us who do. Nevertheless, even with this knowledge we oscillate around our personal Still Point in life, creating tension anxiety, and stress. Tension is a natural part of life, for it leads to exploration of new possibilities, and selfgrowth. However, sometimes we oscillate so far out of our place of peace that it seems impossible to find it again. By understanding that the physical and the spiritual are two aspects of the same unifying principle and not separate it is possible to find balance in a world that often seems to be spinning out of control.

The Still Point is within. It is a consideration or property of the spirit not the physical universe and all of its hurlyburly activity. When you find your personal Still Point, the world slows down and becomes a wonderful experience, no matter what the events of your life may be!

To understand the Still Point it is necessary to understand the concept of a static. The word static means 1. Having no motion; being at rest; quiescent. Fixed; stationary. In physics, static means 2. Of or relating to bodies at rest or forces that balance each other. The brilliant astronomer Tom van Flandern illustrates this concept with the metaphor of a waterfall.[1]. A frozen waterfall is static in the first sense, and a flowing waterfall is static in the second sense. The flowing waterfall contains trillions of moving water molecules, the frozen waterfall is motionless.

A native state personality is a static in the sense of no movement. Here we define static as nonmaterial or nonphysical something that has no moving parts. A static is a creative potential that has the capability of thought, and which can perceive what it has created, somewhat like we do when we dream.

How does the pure static Spirit interface with the physical world? The static must allow the free flow of movement that surrounds it. Resistance of any kind pulls the static from the Still Point and into the energy maelstrom. The degree of resistance to life determines your level of anxiety and stress!

The spirit has the capability to cocreate his or her life, applying the subtle but powerful universal laws that are built into the fabric of reality. The most important step to finding the still point is to believe it is possible, and to understand that the spirit is always senior to whatever is occurring in the physical plane. The spirit, when it becomes too embroiled within the physical, loses sight of its own power. Only when the static turns away from itself can it get into difficulty! The Light, instead of illuminating the darkness, becomes entangled within it. We only need remember that the negative gains its power from the positive, and that we create the parameters of our personal existence.

The Still Point is the physical analogy to the pure static of Spirit. As the energy of life moves all around us 6 billion of us interacting with each other, as well as the animal, plant and insect life of our planet it is possible to find a point of dynamic balance. Dynamic balance is like the flowing waterfall, where all components are allowed to fully express themselves without resistance or prejudice. Attempting to fight or stop the actions of others is a good way to lose yourself and create disharmony in your life.

Let the viewpoints and actions of others slide off you effortlessly, like the leaf that bends under the dewdrop. Create your life in a positive fashion; find the highest expression for your life and create it, every day! Do not fight or resist those whose awareness is less than yours. By your example, be a beacon of positive expression of your own divine creativity.

As the forces of Light (the self aware) meet the forces of darkness (those who have lost themselves) remember that the dark receives its power from the Light. When confronted by irrationality or repellent words or deeds, shine your light upon it. To do this you must look inward and find your personal Still Point. Every one of us has this ability, but we do not often step into our power and exercise it, for we have been taught to fight and beat down opposition. This idea, however, is false and will lead those who follow it down the road to misery.

Those who believe that you only go around once are the primary mischief makers on our planet. Such people believe they must scrap and claw and accumulate as much as possible before their consciousness is snuffed out completely at death. If you wanted to enslave a population, the inculcation of such a belief would be a great way to do it! However, this belief is the ultimate lie, for it denies your true nature.

If you live in the United States, you can see how rapidly our personal freedoms are being attacked by a frightened rogue element which conceives that safety must be gained through absolute control. These elements are trying to create the frozen waterfall, by forcing all activities into a rigid mold, instead of the dynamic waterfall which allows freedom and action. Even though this plan is doomed to failure, our resistance and struggle with these forces can only give them more power and create more difficulty for us.

We all signed up to be here on planet earth for the completion of this latest planetary cycle. We must trust in the power of universal laws, which were created by beings of the Light to empower beings of the Light. These laws are invisible to those who create chaos, but the fact is that all are subject to them.

During this crucial period in our planet's history, we must turn our thoughts away from the darkness and toward the Light. The power of thought accesses the subtle, but enormously powerful forces of the universe. These are the same forces that keep the sun converting hydrogen to helium, maintain the planets in orbit around the sun, and which transform the seed into the flower. These forces are far more powerful than the gross forces of tyranny and oppression.

The battle will be won, not in the streets or on the battlefield, but within our own hearts and minds. Thought is invisible, but immensely powerful, and accesses the creative energy of the universe! In order to establish a new paradigm of cooperation and prosperity for the people of earth, we must turn away from the negative and focus on the positive.

Find a quiet place and either sit or lie down comfortably. If the weather is clement, go outside and lie on the grass. Feel your body in the chair or on the floor. Feel the life force flowing through your cells. Imagine earth energy flowing upwards from the earth and into your body, and spiritual energy downward from above. Feel yourself at the intersection of these two energy flows and find your balance. Try to find your personal Still Point.

[1] we must distinguish two distinct meanings of the term static. One meaning is unchanging in the sense of no moving parts. The other meaning is sameness from moment to moment by continual replacement of all moving parts. We can visualize this difference by thinking of a waterfall. A frozen waterfall is static in the first sense, and a flowing waterfall is static in the second sense. Both are essentially the same at every moment, yet the latter has moving parts capable of transferring momentum, and is made of entities that propagate. From The Speed of Gravity Physics Letters A 250:1-11 (1998). Article available at http://www.metaresearch.org/ cosmology/speed_of_gravity.asp