I have said often in these essays that a person is broadcasting a 'vibrational signal' to the universe. What exactly does this mean?

In our vibrational model, each thought is a vibration, or a frequency, and is the fundamental quanta. Visualize a thought as a particle that vibrates internally, and radiates energy

or as a combination of waves, each of a certain shape, amplitude, and frequency, which are representative of its content.

Most of us have seen the waveforms that a piece of music will make, when it is graphed on a computer screen. A thought can be modeled as a unique combination of waveforms, which has an overall pattern of vibration. [1]

An analogy would be the experiments in vibration conducted by the German researcher Hans Jenny, who used sound, electricity and other vibrational stimulation to produce clearly defined visual models of vibrational effects. 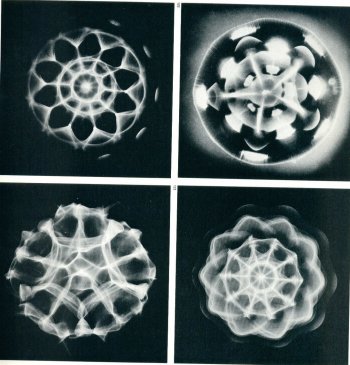 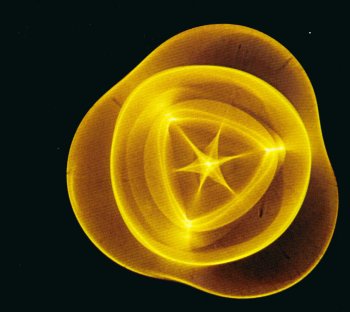 (Images produced by vibrational stimulation of various liquids).[2] In the vibrational universe model, thoughts produce specific vibrational patterns, depending upon their content.

We may understand that everything in the universe is conscious by simply observing the process of cell division. The material of the cell, and the elements within it, self-organize; the material within the cell re-arranges itself such that a duplicate cell is literally created from the material of the first cell. Merely by observing this process, it becomes evident that the cell itself is programmed to perform certain tasks, which it does efficiently and effectively, over and over again, millions of times every day. This programming is not arbitrary; clearly and indisputably, it is intelligent. The source for this programming can not be DNA, for DNA is itself composed of sub-elements which must also self-organize.

How do the atoms and subatomic particles which form the sub-units of the DNA helix self organize? Somewhere, invisible to our scientific instruments, are design templates associated with cell division. Where are these templates? In my view, they exist within a subtle field of energy created by a non-physical consciousness. Rupert Sheldrake, in his book, "A New Science of Life," (which attracted much praise and much criticism when it was published in 1981) introduces the concept of formative causation through morphogenetic fields. Sheldrake says "morphogenetic fields can be regarded as analogous to the known fields of physics, in that they are capable of ordering physical changes, even though they cannot be observed directly." [3] Sheldrake does not go so far as to say that the causitive role of morphogenetic fields is caused by conscious design, but there is no other explanation! Matter cannot create other matter. The Law of Conservation of Energy states that energy can neither be created nor destroyed; if that is the case, then all of the matter and energy in the entire universe must have existed, without reduction or increase, since time t = 0, which is plainly impossible. The only explanation for the origin of the universe is a virtual, creative principle (not a Creationist Principle, please!)

The origin of cellular programming must be consciousness. The cell is conscious, it is aware, and it knows what it is doing, every time.

Science, correctly, balks at such speculative and unprovable explanations, because science must deal with the tangible and the measurable. Scientific investigation must, of necessity, halt at the current level of observation and measurement, both at the microscopic and macroscopic levels. Beyond the scientific spectrum of physical meaurement are the subtle levels of vibration, which reach all the way back to thought itself, and consciousness. Consciousness creates thought and has the ability to perceive what it has created. Science cannot take it's arguments about the origin of the universe, or cell division, back far enough, for it leads to a scientifically unpalatable ans unmeasurable First Cause for the process. That First Cause is consciousness itself, which has evolved thought, and the universe, over billions of years, to its present level of sophistication. The observable effects of consciousness on matter and energy are analogous to the geometric patterns which show themselves in the media in one of Mr. Jenny's experiments. A vibrational universe has the capacity to distinguish vibrational signals at an unimaginable degree of subtlety and accuracy!

The power of thought is tremendous, and it is through thought that we influence the energy field around our bodies, and affect the cellular material within the body. Moreover, our thoughts -- which proceed from a state of being, a fundamental decision about how we want to BE -- send a vibrational signal to everything else in the universe. In effect, the rest of the universe can 'read our minds'. So much for privacy laws!

On the subtle levels of thought, each one of us is transparent to everyone else. We are like an open book, or a mirror, which reflects our personal vibrational portrait to all who can perceive it. That is why it is impossible to con the universe at large. We may fool others, we may even fool ourselves, but we cannot fool the universe. Everyone and everything in it is responding precisely to whatever is focused upon in thought, no matter what we say.

How is the interaction of vibration managed? The answer is, through the all powerful universal law known as 'like attracts like'. Some call this the Law of Attraction.

Why is the Law of like attracts like so important? Because it works upon the principle that what is activated is what is broadcasted. In other words, if Jill says she wants to be wealthy, but spends most of her time bemoaning her financial situation, her signal to the universe is one of lack of money. And so Jill continually winds up with not enough money. Jill's vibe of 'not enough money' is matched up with all other signals of the same kind. Therefore Jill finds herself associating with people who do not have enough, in situations in which there is not enough, over and over. This, unfortunately, leads Jill to continue to activate the same signal, because she observes her poverty over and over again. Jill begins to assume that a natural law of her life is not-enough-money! But this is not true at all: Jill is not prosperous because that is where her attention is all of the time! Jill continuously creates from what she observes, and because she observes the same things, she continues to activate the same vibrations and send the same signals over and over again, by the sameness of her thoughts. We can describe poor Jill's creative process very simply: "same old, same old."

So the rule of the game is, focus exclusively upon what you want, and do not give any of your attention to those things you don't want. This is often easier said than done, but it is your work. But it's fun work, for you begin to change your focus from the bad stuff to the good stuff, and you begin to feel better! In this way, your life will, more and more, be filled with the manifestations of your desires.

[1] We postulate a universe-wide field of consciousness, composed of thought, which is at once responsive to the thoughts of consciousness, and which communicates instantaneously from one end of the universe to the other. These instantaneous communication phenomena have been described by physicists in experiments with correlated particles, which communicate with each other over macroscopic distances. Michelson and Morely supposedly disproved the existence of the ether over 100 years ago; nevertheless, we postulate a field of consciousness which is so refined that it is, as yet, undetectable by instrumentation. For a more technical explanation of this idea from a scientific viewpoint, see Dr. T.E. Bearden, "ON EXTRACTING ELECTROMAGNETIC ENERGY FROM THE VACUUM " at www.cheniere.org, and his other Technical Papers.