How should I deal with my problems? This is a question I have asked myself over and over again. There isn't any worse feeling for me than having something in my life I don't like. I always have the urge to get rid of it NOW. I want to get into action right away to fix it. But when I do I always find myself mired in crap and the situation gets worse. Every time I put out one brush fire, another one pops up somewhere else.

I have discovered that when a problem arises, the first thing to do is ignore it. That sounds weird, but there is a good reason for this. If you try to solve the problem with the same energy that created the problem, you're going to exacerbate the problem. Therefore you have to ignore the problem long enough to get yourself on a new track of thought that transcends the problem.

By first ignoring the problem, I take my attention off it and so lessen the current of energy I am sending to it.

I always create my problems. I'm really good at it. A problem is just an energy stream I am sending to something I don't want. So when that happens, I try to stop the flow.

So the first step in handling a problem is ignoring it.

The second step is playing the game: 'what do I want to create instead of the problem, that feels better than the problem.' You are always giving attention to something, so why not send energy to something you want?

The Law of Vibration states that one can never deactivate a problem trying to get rid of something just activates it. You deactivate something unwanted by focusing on something wanted. Like the tuning fork that has been struck, if left alone its vibration will gradually cease. Because we are conscious beings, our attention must be on something, and so our vibrational signal to the universe is always activated on whatever it is we pay attention to. We do not live like hermits -- the daily exposure to family, work, friends, and whatever we observe around us is bound to get our attention.

You can focus on problems or desires. The key to working with problems is to deactivate your internal resonance to the problem, which is causing it to manifest in the physical universe in the first place. Problems are said to be caused by something outside yourself, but that's not true. The SYMPTOMS of the problem are in the physical universe. The SOURCE of the problem lies within you, because the laws of the universe respond to you. Your life is a reflection of your state of being.

Although it might appear that the problem came first, and then you noticed it and began to resonate to it, this is backwards. Consciousness is cause, matter and energy is effect! The problem in that area is a direct result of your thoughts, decisions, and attitudes in that area.

All right, so how do you place your attention on something good, when you're feeling rotten? I don't know about you, but when I feel lousy the last thing I want is some smiling idiot in my face, telling me to cheer up!

I just ask myself, what feels better, right now? Even if I'm depressed there is always SOME tiny little thing that feels better. It's an effort sometimes because when I'm inside a problem it takes quite a bit of effort to drag myself out of the energy loop I have created. It often feels better just to wallow around in the problem, for at least that energy is familiar (even if it feels rotten), but doing that will get me nowhere. I'm like a hamster on a treadmill.

I just look for thoughts and feelings that feel better to me. Eventually I can pull myself out of the rut. (In the next article we'll discover how to do this in more detail).

This is very difficult to do, impossible almost, if you do not understand the Universal Operating System. I used to think that problems were just a part of my life, that I would always be dealing with messes. I wouldn't even bother to try to cheer myself up because I was too cynical about life. I knew that if I tried to focus on the positive, it would inevitably lead me to feeling more negative. I just didn't understand the Law of Attraction.

The physics of a problem look like this. Here's me, the Source or director of my energy. I have lots of long-established patterns of thought (the *'s).

Inside my head, it looks like a circular racetrack. Start anywhere on the track and you just keep going round and around, and never get off the track of the problem. When you're really stuck in a problem, all of your solutions never go outside the box. The difficulty with problems is that all of your thoughts are constrained to a limited, restricted range of solutions, all of which are at the vibration of the problem itself.

For instance, a typical thought pattern I had on the problem of money went something like this:

How do I get more money? I can only work so hard so my income is limited. Yes, but you could hire more people. But I don't want to have to deal with their screw-ups, and besides there's health insurance and workmen's compensation and taxes to take care of. Ok, then don't hire anyone. Yeah, but how am I going to make more money if I don't bid out more work? etc.

Here's me at various different positions on the track, trying more and more different ways to 'solve' my problem: 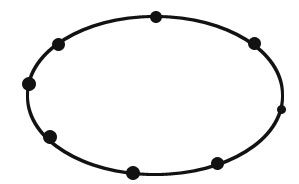 A problem is vibrationally closed, and you are inside it. Why are you inside it? Because you created it!

Well, maybe I could start a new business, I say to myself. Or change jobs. Or go back to school and learn a new skill. Or.... Sometimes I acted on these ideas, but nothing ever came of them, for I was not envisioning in a way that would lead to success. I was too immersed in the energy of the problem!

The situations were slightly different each time, but the feeling (and the result) was usually always the same: a bad experience. Then I said: Reality sucks for me. I can never seem to (fill in the blank).

I found myself examining the energy structures I set up and I can tell you that they all suck. All of them are old patterns of thought and emotion that I was just so TIRED of re-living over and over again. Well, I decided to apply my little theorem of first ignoring them. At first I was afraid because I didn't know if something worse might happen to me! Maybe I was, by my old habit patterns, just warding off even worse stuff that was on the way. But it turns out that by ignoring the problems, everything got gradually better. Now that was a revelation. How could things get better if I wasn't working on solving my problems???

Then I had the realization: because the energy of life is positive and wonderful, and it is flowing through me in every moment. This was one of those defining moments that can change a life around. It certainly did for me. I realized that the universe was benevolent, well ordered, created and maintained by a universal force that is benign and positive, and that I was a part of all of it.

I realized that it is only my resistance to well-being that caused my difficulties in the first place!

That there was a big one for me. I was always taught that 'reality' was tough, that I had to fight my way through life to get anything done. Well, it's not true at all.

The second realization I had was that THE ENERGY OF MY PROBLEM ISN'T WHO I AM.

After realizing that, things got a lot simpler for me. Maybe it can for you too.

It seems strange to ignore problems, but that is the only way to ensure you never have any more of them. Handle whatever is in your face, and then begin to use the power of the Law of Vibration and the Law of Attraction. Don't give potential problems any more of your attention and see what happens. Deactivate the source of the problem by placing your attention on something that feels better.