A Presidential election is approaching in the United States. All across our country, ballots are being prepared. Even though third party candidates will appear for many political offices, the mainstream media will focus exclusively on the race between Democrats and Republicans.

When the votes are counted, the major networks will show red and blue maps, indicating which state voted Democrat and which Republican. Third party votes will never even be mentioned.

In the United States, and elsewhere, a false dichotomy is offered: Left vs. Right. On the left are "liberals" and on the right are "conservatives." The ultimate leftist government, it is said, is Communist, the ultimate right–wing government is fascist or Nazi.

Whether "leftist" or "rightist," tyrannical governments are collectivist, and aggrandize power to themselves. Benign governments are much more "hands off," and allow freedom of expression and religion. A collectivist government is hierarchical, with a small elite at the top.

People are sometimes fooled by nomenclature. The formal name for the "rightist" Nazi Party was the National Socialist German Workers Party. The formal name for Communist China is the "Peoples Democratic Republic of China." Never were two tyrannical, collectivist outfits more inaptly named.

When a government or a corporation becomes collectivist, it "collects" power unto itself. A cursory examination of Congressional legislation since 9 / 11 shows that the government of the United States is doing just that.

The late great intelligence analyst Christopher Story, in one of his intelligence updates, pointed out the true state of affairs within the U.S and British governments: 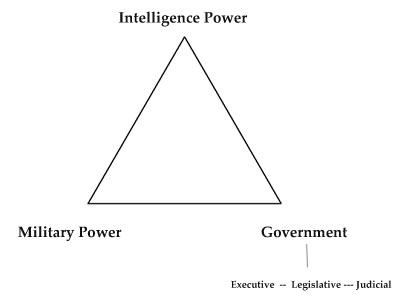 Since the passage of the National Security Act in 1947 –– which legalized the commission of assassinations, torture, blackmail, and other crimes, under the blanket designation of "national security" –– and Operation Paperclip, which imported Nazi's into our intelligence community (see previous blog post), the cancer of criminality within our government has grown unchecked.

Congressional oversight of the huge intelligence establishment is a thing of the past. Actual expenditure for the intelligence community is unknown and hidden within the budget. In a 1974 Supreme Court decision, a lawsuit brought by a Pennsylvania accountant, which demanded that all monies spent on the CIA be publically declared, as demanded by the Constitution, was defeated by a 4 – 3 vote. The deciding vote was provided by Chief Justice Warren Burger, whom Sandra Day O'Connor famously referred to as "the dummy."

Freedom is what freedom does, and vice–versa.

It is important to look beneath the rhetoric of politics, and become informed. Look not at the false dichotomy of Left and Right, Liberal and Conservative, but to the true choice of Tyranny and Freedom.

Judge all public officials by their actions, and measure them against the true standard of freedom. Freedom is Light, tyranny is darkness. Now, more than ever, Americans must become true Patriots and emulate the informed and intelligent thinking and actions of our forefathers.