The Cycle of Life

It is said that a child is closest to God. What does this mean?

I think it means that a child is more cognizant of his connection to Native State. I have also noticed that as I grow older, I seem to get wiser and feel a much greater sense of who I am. These ideas can be illustrated with a circle. 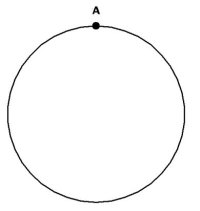 At birth, (point A) consciousness enters the body of the newborn. You are completely and totally aware of yourself as a spiritual being, and your connection to higher consciousness. As you travel further along the circle, you become more and more separated from this awareness. That is because you get used to the senses of the body interpreting your experience. By the time most of us are three or so, we are fully immersed in the physical experience.

As parents, we have all observed how our children begin to find themselves and, during the teen years, seem to think they know it all! As we rush headlong into adulthood, we begin to find our purpose, or rebel against the roles assigned to us by parents, teachers, and society. Our awareness of the "other side" becomes fainter and fainter as we travel further and further from the arrival point.

And that is how it should be! After all, we have incarnated earth to have a physical experience. The human body is designed to do just that. Our perceptions become severely (but intensely) narrowed, and we are fully in our human life. At the halfway point (around 40 or so) we come back towards A. Many of us notice that we feel wiser, more sure of ourselves after middle age. This feeling is much more than the mere accumulation of experience; it is actually the spirit turning his or her spiritual ship toward the joyous port of Home.

Even those who never seem to "get it" in life are aware of their position on the circle of life. As they get closer and closer to the time of transition, these folks begin to fight and struggle against the inevitability of "death." As the soul reaches point A again, he/she returns to Native State. A is both the arrival and departure point for something eternal -- your own self awareness.

Of course there is no death, only a continuance of consciousness. But on earth we are taught that 'when you die, you're dead.' Take my word for it: even amongst those who call themselves spiritual, there is an anxiety associated with the death process. This is almost an inevitable consequence of being immersed in the mass consciousness of humanity. One can no more not have death anxiety than one can go swimming without getting wet!

A human life is designed to immerse one fully in the physical experience. This is why it has been so difficult to change human societies in a positive direction. There is always a significant percentage of us moving away from the departure point! Although the fundamental nature of a human being is spiritual, a physical lifetime is designed to deliberately obscure spiritual awareness in favor of a wild ride on the human rollercoaster.

Of course, these statements are only general. There are many who live mindful, spiritually aware lives at every life stage. And as the population of our planet approaches critical mass, there is the potential for an evolutionary leap in consciousness. If we can establish new memes based upon harmony, cooperation and prosperity, instead of conflict, competition and scarcity, we can evolve a new consciousness on earth. And it can happen at the speed of thought!

Evolution proceeds, not smoothly upward, but by jumps. If we can establish a new consciousness upon our planet, one which emphasizes the truth of the non-physical nature of consciousness, we can begin to rise above the tired old memes of the previous planetary cycle, and establish sane societies based on the fundamental truth of man's spiritual nature and the inherent value of each and every human being.

We are in the midst of that process right now. Although it appears that the forces of fear and ignorance are ascendant, what is really happening is a brutal opening of rigid societies (including our own) that are being forced to acknowledge the worth of individual human beings. China and the Islamic nations are being integrated, kicking and screaming, into planetary society and the world economy. Although one may despair at the idiocy of the methods being used and the intelligence of those behind these forces, history will record their actions as ultimately beneficial.

Just as in individual human lives, the planet earth is again approaching departure point A. After thousands of years, the latest planetary historical cycle is nearing completion. In the next twenty years we will choose the consciousness that will determine the future of humanity for the next several thousand years. Let's make that future a positive one! In a vibrational universe, the power of individual decisions is always recorded in the mass consciousness. Each and every one of us can be a powerful source of change in our own lives and, by example, positively affect the lives of those around us.