The consciousness of mankind is going through a "cleansing."

By this I mean that the uninspected beliefs of our species are coming to the surface. Primary amongst these beliefs is the belief in scarcity and lack. And beneath that is the belief in unworthiness.

In previous newsletters I've talked about the population increase as something very positive; an attempt by the spiritual aspect, the Higher Self, of our species to increase the background vibration of thought, which affects the underlying memes that direct the path of human thought. All species have fundamental, underlying beliefs and patterns of thought that direct the activities of the race. This is most evident in animals, where a certain birds will fly thousands of miles, knowing instinctively where to nest; or the movement of salmon, who know the place of their birth and go back to hatch new eggs for the coming generation. It is suspected that the magnetic field of the earth is in some way responsible for the actions of birds, but no one really knows how it happens, and there is no valid scientific explanation for it, so far as I know.

The human race also has these fundamental, underlying patterns of thought. I have called the collection of these patterns an attractor. An attractor, in chaos theory, is a set of points or an overall dynamic pattern to which a system settles down. Nature's complex systems are very sensitive to initial conditions. This concept is illustrated in the famous Butterfly Effect, in which a butterfly's wings in Brazil create a cascading pattern that eventually causes a tornado in Texas. When Edward Lorenz studied weather patterns back in the 60's, on his primitive computer, he used numbers with accuracy to 6 decimal places. But then he decided to cheat a little. and used numbers with three decimal places. So instead of a number like 12.345809, he used 12.346. But when he plugged his numbers back into his computer, he discovered that the weather systems he was studying went off in a different direction!

This is what is meant by sensitivity to initial conditions. Nature herself, apparently, is accurate to many, many more decimal places than even our most powerful modern computers, so any changes we make can lead to completely different outcomes. That is why so many people are concerned with fossil fuel emissions and their effect on the planet's weather and ecosystems. No one can actually predict the weather (or how much we are ultimately affecting the planet) but we know that weather has definable characteristics: rain, wind, snow, and storms. Without getting too technical, an attractor has a basin, or a certain set of behaviors, to which the system will settle into. But the pattern can change when the initial conditions change!

If you study human history you can see that it is self-similar. In chaos theory and in fractals, self-similarity is prevalent. Here you can see it in the famous "fractal fern:" 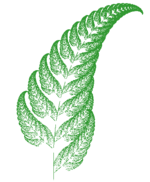 From some very simple rules, you can create very complex systems that seem to have no order whatsoever (like the weather) but that are actually determined by a set of known conditions. The famous Mandelbrot Set, which we have seen before in previous newsletters, is a self-similar but very complex system that evolves from a very simple equation: z = z^2 + c. By varying z and c, (a constant) you get an infinite variety of new patterns.

The point is that the belief systems of mankind seem to  repeat in a self-similar fashion, over and over again.  We can apply an analogy of chaos theory to thought itself. For the past several thousand years, mankind has been rooted to a certain "attractor," in which the thought of mankind repeats over and over again, never the same way twice, but always rotating around certain fundamental memes. These fundamental memes seem to be rooted in unworthiness, and scarcity. 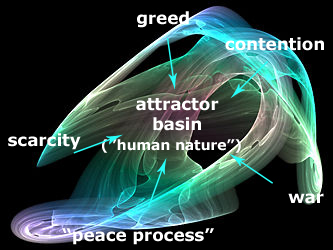 attractor First there may be a peace process, which then cycles around to ideas of domination and control, and then greed, or scarcity, and then war, and then another peace process… our thought patterns are never able to escape from the old memes, which are held in place vibrationally by the force of the old attractor. This works simply because we choose the old memes, over and over again, and history “repeats itself.”

The old memes are the "initial conditions" of humanity's thought, and although they may change slightly from generation to generation, the human race has never been able to get over the hump, and move it's fundamental beliefs to a new attractor, a new set of initial conditions that will cause a new set of behaviors and result in a permanent change in thought for the better.

It is my belief that the population increase is accelerating our progression toward a "tipping point," in which we have an opportunity to change the fundamental beliefs of our race. We are in a sort of chaotic period right now, in which the thought and beliefs of our species are changing. We have the opportunity to choose the old ways once more. If we do, the progress of humanity will follow the same pattern: rise, and then fall. Already, the  current international financial crisis is leading to a potential breakdown in the distribution systems that carry food and manufactured goods from one place to the other. This is exactly what happened in ancient Rome. If these distribution systems collapse, our societies will once again regress. Because of the self-similarity of nature, however, this pattern of repetition will not be the same as it has been in the past. It will resemble, but be different from, what happened during history past, but it will revolve around the old attractor.

Or, we can choose new memes. We can choose abundance, instead of scarcity. Instead of hero worship --which strengthens the old memes of follow the leader and hierarchy (rule from above) we can choose to trust and respect self, and to think for ourselves. Instead of hiding our light, we can choose to express it. These all lead to a resonance away from conflict and toward cooperation, toward abundance, toward mutual respect and cooperation.
Each and every one of us has the power to redirect our own lives, but also contribute to the overall progress toward the new attractor. That is because individual choices all contribute to the whole, and choices based upon the higher vibrations are more powerful than those based on the old memes. I keep emphasizing this because it is so important!

Our societies are presently based upon the old ideas of linearity and hierarchy. These ideas are outdated, for science has shown us that nature herself is dynamic and non–linear. The old attractor is like a primitive tape recorder, in which one can only get to the end of the tape by winding through the entire reel; but nature herself in random–access, like a DVD. We can jump anywhere we want, we can change how we think and make quantum leaps!

Our primitive news media assumes an attitude of superiority, telling us what to believe, and filtering current events to present a biased viewpoint. Our governments are also hierarchical, passing laws that benefit a few and harm the many: witness the current financial crisis, in which banks and insurance companies that caused the problems in the first place are immediately rewarded with hundreds of billions; and the recent election, in which third party candidates are never mentioned -- we see only a "blue" and "red" board upon which only the current corrupt established parties are represented. The latter is a classic propaganda tool in which people are given "choices" that have been carefully circumscribed.

The point is that these patterns are possible only because the background vibration of humanity resonates to the old attractor! This is not obvious because we are still thinking linearly. We are still in tape–recorder mode, instead of DVD mode! Once you begin to look at current events with this new viewpoint, you will be astounded. Like Neo in the Matrix, you can begin to see how the old memes are propagated, and it actually becomes fun to listen to the news.

Every choice you make is important!

Every decision you make that goes toward the light makes it less probable that humanity will choose the old memes, and more probable that we will evolve to a new one based around abundance, cooperation, and mutual respect.
You are not powerless, as I keep saying over and over. The choices you make are invisible, and seemingly have little effect; but in fact, are very powerful and influential.

I opened this essay by saying that the consciousness of humanity was undergoing a cleansing. When you clean off your dirty windows, you make a mess first, as the Windex removes the old dirt from the surface. We are seeing the exposure of that which was once hidden, and it seems we are going down the tubes. But this is just the muck coming off the windows. The current financial crisis is a result of hidden decisions by certain people who are now being drive against the ropes by the increasing vibration of the consciousness of humanity. The muck has been released from the window pane, and it looks pretty ugly.

Now is the time for the clean rag of honesty, personal integrity, openness, cooperation and respect to clean off the dirt. The darkness has only one very limited option: to convince you that everything is hopeless, that the sky is falling, and that we are all headed to perdition. That is the road back to the old attractor! The True Path is the one that leads to the light. Light dissolves the darkness, but it takes a little time.  Continue on the road toward personal truth and happiness, for that is the choice that will move us as a species to an entirely different level of being and doing; one which has the potential to completely transform the direction of our societies, and our personal lives as well.