The icosahedron has 12 vertices, 20 faces and 30 sides. It is one of the most interesting and useful of all polyhedra. Buckminster Fuller based his designs of geodesic domes around the icosahedron.

OK, lets go through the usual analysis and then get on to the interesting stuff!

First. lets calculate the volume of the icosa.
Using the pyramid method we have 20 equilateral triangular faces which serve as the base to a pyramid whose topmost point is the centroid of the icosa.

Figure 4
Some icosahedron faces with midpoints. All 20 faces will be connected to O to form 20 pyramids.

All vertices of the icosahedron (as with all 5 of the regular solids) lie upon the surface of a sphere that encloses it. The radius of the circumsphere is O to any vertex, in this case,
r = OA = OB = OD = 1.
The height of the pyramid is h = OM.
In order to find h we need to recognize that any of the triangles OMA, OMB, OMD are right.
This is because OM is perpendicular to the plane of triangle ABD by construction.
AB = BD = AD = side of icosahedron = s.

Figure 6
We know, from  The Equilateral Triangle that DM =

In order to find h, we need to find OD = r, in terms of the side s of the icosahedron.
To do that, we have to recognize one of the basic geometric properties of the icosahedron.
Take a look at Figure 1. DI, BG and FK are all diameters of the enclosing sphere around the icosahedron.
Notice rectangle BFGK and notice that BG, FK are both diagonals of it. Now notice that both FB and GK are both diagonals of the 2 pentagonal planes marked in gray.
We know from  Composition of the Pentagon  that the diagonal of a pentagon is

Figure 7
FK is the diameter of the enclosing sphere around the icosahedron. OF = OK is the radius r, which we are now trying to find.
FG = BK is the side s of the icosahedron.
We have found that FB = GK =

is the height of the icosahedron pyramid.

There are 20 pyramids, 1 for each face so

What is the surface area of the icosahedron?
It is just the area of 1 face * 20 faces. The area of each face is, from above,

We have already noted the relationship between the radius of the enclosing sphere and the side of the icosahedron:

The side or edge of the icosahedron is slightly larger than the radius.

DOB, can be seen clearly from Figure 5, and we diagram it in Figure 8 below.

s. DB is the side of the icosahedron, s.

XOB.
We recognize triangle OXB as our old friend the Phi Right Triangle. From this we know that OX / XB =

Figure 9
The intersection of the 2 faces DFA and ABD forms the dihedral angle FXB. (See Figure 4 as well).
FX = XB we know, from  The Equilateral Triangle  to be

FB = a diagonal of one of the pentagons. This can be seen in Figure 1 or Figure 4 as the diagonal of pentagon ABCEF.
Therefore FB =

.
Triangles XPB and XPF are right by construction, so

Now lets figure out the distances from the centroid of the icosahedron to any vertex, to any  mid-face, and to any mid-side.
We already have the first two (see Figure 10). OD = OA = OB = r =

Now we need to find, for example,  OX.

distance from centroid to  mid-face =

Now lets get to the interesting stuff!
Going back to figure 1, we can see that the icosahedron is composed of interlocking pentagonal 'caps.'
Look at D-ABCEF and I-GHJKL to see this more clearly. Of course , EVERY vertex of the icosahedron is the top of a pentagonal cap, not just D and I.
Let’s analyze this cap:

Figure  12
Triangle DQF is right, by construction. D is directly over the point Q in the icosahedron.
How far off the plane of pentagon AFECB is D?
In other words, what is the distance DQ?
First, realize there is a circle around pentagon AFECB, even though I haven’t draw it here. QF is the radius of that circle. We know from   Construction of the Pentagon, Part 2 that this radius
r = FQ =

In order to form equilateral triangles with D and the other vertices of the pentagon, D has to be raised off the pentagonal plane AFECB by the division of the radius of the pentagon (FQ) in Mean and Extreme Ratio.
The triangle DQF is therefore a Phi based triangle, specifically, a

triangle. From  The Phi Triangle  we know that

DFQ = 31.71747441°.
Is this surprising? It was to me! I didn't expect something that was composed entirely of equilateral triangles to have any relationship to

. An equilateral triangle is

Figure 13
Here we have Figure 1 basically, with the mid-face points of the 2 pentagons marked off as Q and Z.
We have already seen that DQ is

with respect to the side of the icosahedron.
That means  IZ =

s as well, since IZ = DQ.
What about OQ = OZ? and QZ? How do all of these distances relate to the diameter of the enclosing sphere, DI?

Remember that the distance DI = FK = BG, etc.,  is the diagonal of any of the

rectangles of which the icosa is composed. One of these

rectangles is clearly visible in Figure 12 as BFGK. We know this is a

rectangle because it is the diagonal of the pentagon ABCEF.
In fact, if you place 3 of these rectangles perpendicular to each other, the 12 corners of the 3 rectangles are the vertices of the icosahedron!

Figure 7, repeated
I have copied Figure 7 from above. FK = diameter, OF = radius of enclosing sphere.
We know from above that  d = FK = DI =

One interesting fact appears here: FQ = QZ. This means that the distance from one pentagonal plane to the other is precisely the radius of the circle that encloses the pentagon!

What is OQ?
It looks like OQ is just one-half that of QZ, or

s.  We could have gotten this more easily from the fact that

All of these relationships come from the pentagon!

Take a look at this view of the icosahedron:

Figure 15
As you can see, the 2 pentagonal planes in the middle have magically disappeared and become equilateral triangles! All we have done is placed the icosahedron on one of its faces, dropping it from 30° along the x axis and 30° back along the negative y axis.
It seems that all of our work is wrong, except:

The equilateral triangle faces of the icosahedron are a by-product of how the pentagons interlock. This is shown in  Figure 16 below:

Figure 16 --  attempting to show the individual pentagons of the icosahedron 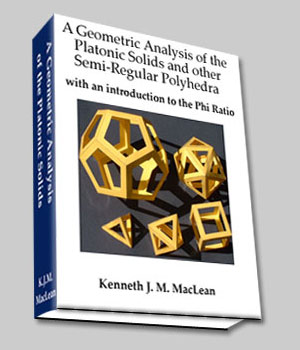