What if the universe is just a sophisticated holographic illusion? 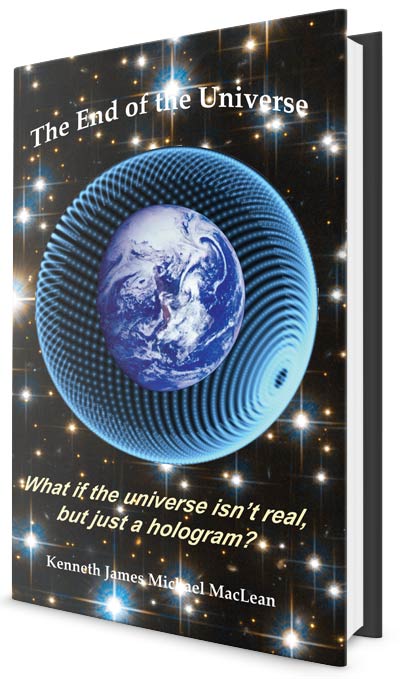 The End of the Universe!

When the brilliant but troubled cosmologist Dr. Jack Martins built the world’s first spherical hologram, he created a 3 dimensional image that was so real, it scared the daylights out of an assembled panel of scientists, politicians, and media in Washington DC

Further research enabled him to prove the validity of the Holographic Principle, which states that the reality of our 3 dimensional universe can be described on a 2 dimensional boundary.

With his spherical holograms, Dr. Martins demonstrated that the universe we see through our telescopes might not really exist-- that it might just be a very real, very sophisticated illusion!

Dr. Martins was pilloried as a kook, until an astronomical event occurred that blew the minds of every single person on earth...

What is a spherical hologram?

A spherical hologram is generated not on the 2 dimensional surface of a flat, light sensitive plate, but on the surface of a 3 dimensional sphere. Such a hologram would exhibit amazing and unexpected properties, and be as far superior to a standard 2 dimensional holographic image as a child's drawing is to the intricacies and complexity of a high-definition image.

Dr. Martins showed that the 2 dimensional boundary of a spherical hologram does indeed describe the reality of our 3 dimensional universe, so vividly that it is indistinguishable from reality.

When Jack extended his theory to encompass the Holographic Principle -- and postulated that the universe we see through our telescopes may not exist -- he was pilloried by the scientific community and the popular media. There was only one problem: when a probe was sent out to Alpha Centauri, as part of NASA's deep-space exploration program, the probe disappeared at exactly the spot where Martins predicted the boundary of a theoretical spherical hologram 4.618 light years in diameter! A second probe also disappeared at the exact same spot.

As the earth descends into chaos and Jack Martins' own turbulent life comes crashing down around his ears, humanity discovers the truth about the universe and what's really "out there!"